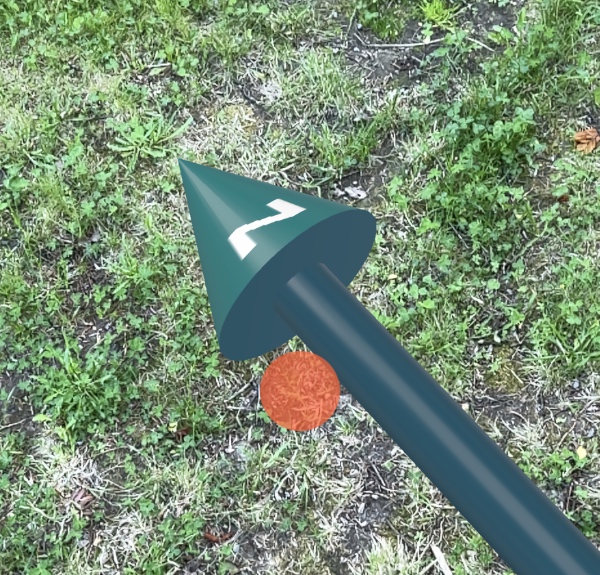 In the app Arboreal Forest, a local coordinate system is created that is based on AR. It uses the camera and internal sensors in the phone and not the GPS.

Arboreal Forest saves the position of each tree measured (Table 1). The local coordinates could be used to match trees with remote data such as airborne Lidar, drone images or aerial images.

We have come to the conclusion that it is because we sometimes get an incorrect estimate from the magnetometer about which direction the north is. It happens more often when you are in a magnetic field such as an office or when you have your phone near another phone. Feel free to try it yourself by opening the compass app on your phone and see how well it points to the north.

To be able to draw the user’s attention to problems with the compass, we added a north arrow in the Arboreal Forest app (version 2.25) which is visible before you place the center of the sample surface (Figure 1). Then you can see if it is pointing in the right direction. The arrow points to geographical north and not magnetic north.

If the north arrow points incorrectly and you want to orient the sample plot correctly, make sure you move away from the magnetic field you are affected by and walk around so that the compass in the phone starts to sense the earth’s magnetic field.

In Arboreal Forest you can do a line transect where you measure trees within a certain distance from a line. Each time the user crosses the line, we save GPS coordinates and local coordinates.

For most users of Arboreal Forest, it does not matter if the test plot is oriented in the right direction. The area measurement is not affected by problem with the magnetometer.

If you are going to use the data to match with individual trees from aerial images, drone images or lidar scans, you should check that the north arrow is correct before you start measuring.

This website uses cookies to improve your experience while you navigate through the website. Out of these, the cookies that are categorized as necessary are stored on your browser as they are essential for the working of basic functionalities of the website. We also use third-party cookies that help us analyze and understand how you use this website. These cookies will be stored in your browser only with your consent. You also have the option to opt-out of these cookies. But opting out of some of these cookies may affect your browsing experience.
Necessary Always Enabled
Necessary cookies are absolutely essential for the website to function properly. This category only includes cookies that ensures basic functionalities and security features of the website. These cookies do not store any personal information.
Non-necessary
Any cookies that may not be particularly necessary for the website to function and is used specifically to collect user personal data via analytics, ads, other embedded contents are termed as non-necessary cookies. It is mandatory to procure user consent prior to running these cookies on your website.
SAVE & ACCEPT